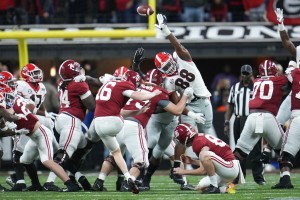 Alabama place kicker Will Reichard has a field goal attempt blocked during the second half of the College Football Playoff championship football game against Georgia Monday, Jan. 10, 2022, in Indianapolis. (AP Photo/Paul Sancya)

Alabama had plenty of chances in the College Football Playoff championship Monday — but rarely turned those opportunities into touchdowns.

The Crimson Tide settled for field goals on three of four red-zone trips.

Alabama scored its only touchdown on a 16-yard drive and a blocked field goal prevented Alabama from adding any points to cap a 17-play drive that took nearly eight minutes off the clock in the third quarter.

That allowed Georgia to take control of the game late in the fourth quarter. The Bulldogs won 33-18.