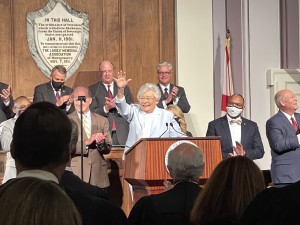 Gov. Kay Ivey delivered the annual State of the State Address to lawmakers, Constitutional officers, members of the Alabama Judiciary and others Tuesday night.

“I am pleased to report that the state of our state is strong,” Ivey said in her 30-minute address.

(WATCH SPEECH AT BOTTOM OF ARTICLE)

“When our prison system went unaddressed for decades and resulted in serious challenges, we found a way toward a solution.

“When our roads and bridges were in need for desperate improvements, we found a way to make significant  progress all across the state.

“When our federal government overreached, we found a way to fight back.

“When all of us in this room come together with the people of our state, Alabama will always find a way.”

As for specifics, she said:

“We are delivering on decades talked-about projects like The West Alabama Corridor, which will connect Mobile all the way to Tuscaloosa with a four-lane highway.

“We are tackling other needed projects to increase capacity like six-laning I-10 in West Mobile from Theodore to Irvington.

“And tonight, I am proud to announce that we will be widening I-59 from Chalkville Mountain Road to I-459, in  east Jefferson County near Trussville, from four lanes to six lanes.”

Ivey also noted that with improvements to the Port of Mobile, exports are up almost 25%.

The governor also mentioned the federal vaccine efforts and the mandates that have been announced in Washington.

“From the moment the White House  rolled out their scare tactic plans to try to force the COVID-19 vaccine on Americans, I assured the people of Alabama that we were standing firmly against it. I’ll call this nonsense what it is, and that is an un-American,  outrageous breach of our federal law.”

She mentioned Alabama Attorney General Steve Marshall by name as someone fighting the mandates in court.

She also mentioned retiring U.S. Senator Richard Shelby and his decades-long career representing his constituents, first in the Alabama Senate in 1970 as well as his four terms in the U.S. House and six in the U.S. Senate.

Ivey called on the Legislature to be wise in using the American Rescue Plan Act funds.

“We must be smart with this one-time money and commit to the people of Alabama that we will wisely invest – not just casually spend – these dollars. I’ll say again that these federal dollars are just one-time funds. This is not ‘free money.'”

She called on lawmakers to use the money for statewide broadband connectivity, water and sewer  infrastructure, as well as hospitals, nursing homes and other health care needs.

Ivey noted the loss of life among Alabama’s law enforcement, saying that 13 lives were lost.

“Last year, I was proud to announce a partnership between the Alabama Law Enforcement Agency and  KultureCity. Thanks to this first-of-its kind partnership, every ALEA trooper is now trained to be sensory inclusive. Folks, Alabama is the first state in the nation to take this major step forward.

Ivey says she is proposing a $12 million investment  for two additional mental health crisis centers, as well as other health services.

She is also proposing funding for after school programs.

“In Alabama, our students will be focused on core curriculum.  That means being proficient readers by the end of third grade.  After we collect useful data during this upcoming spring semester, implementing the Alabama Literacy Act will be a must.

“Tonight, I am pleased to lend my support to legislation that will create a Math Task Force to provide timely and actionable recommendations for recruiting and retaining math teachers, increasing support for struggling  students, as well as for evaluating the quality of our assessments, learning materials and standards.”

Ivey said that the state should no longer accept a failing elementary school.

“Early learning is the bedrock of a quality education. How can we expect to have successful middle and high  schools if we have failing elementary schools?”

She proposes grants for failing elementary schools customized to the particular needs of a struggling school.

“There is great possibility in the future of Alabama. This is our opportunity. So, let’s not waste a moment.”

Even with a Republican-controlled Legislature, her proposals will still have to win approval in the Alabama House and Senate.