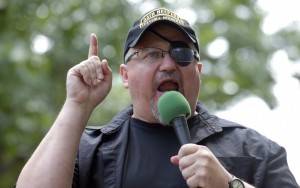 Stewart Rhodes, the founder and leader of the far-right Oath Keepers militia group, has been arrested and charged with seditious conspiracy in the Jan. 6 attack on the U.S. Capitol.

The Justice Department announced the charges against Rhodes on Thursday.

He is the highest-ranking member of an extremist group to be arrested in the deadly siege.

It is the first time the Justice Department has brought a seditious conspiracy charge in connection with the attack on the Capitol.

Rhodes is charged along with more than a dozen other members and associates of the Oath Keepers, who authorities say came to Washington intent on stopping the certification of President Joe Biden’s victory.