Two Arrests Made in Horse Theft Case in Dallas Co.

Two people are arrested in connection to a stolen horse in Dallas County — and the suspected horse thief is a juvenile. 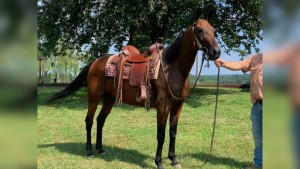 Granthum says the juvenile broke onto private property — and lead the horse away — from behind the wheel of a car.

He says the already injured horse came up lame when the teen began riding the animal.

“We have several witnesses that actually saw him riding the horse,” said Granthum.

“And we had people to come forth that actually saw him and it’s a small baseball field next to one of our public schools, and he was out there showing off on the horse.”

Then the teen called 23 year old Terrius Smith of Selma for help — when the horse’s condition got worse.

Granthum says the suspects then took the horse to a secluded road — and dumped the animal into a small floodplain.