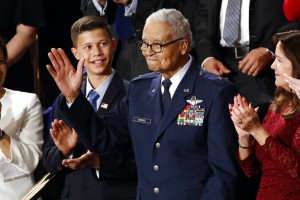 One of the last surviving Tuskegee Airmen, Charles McGee, who flew fighter combat missions over three wars, has died.

A family member says McGee died on Sunday at age 102 at his home in Bethesda, Maryland.

The Tuskegee Airmen is the nickname of the first African American unit to fly combat airplanes in World War II.

McGee was among more than 900 men who trained in rural Alabama after the Army Air Corps was forced to admit Black pilots.

McGee went on to fly combat missions in World War II as well as the Korean and Vietnam wars.