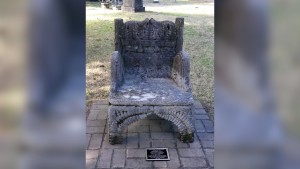 A judge has delayed the trial of a New Orleans man charged with stealing a chair-shaped Confederate monument from a Selma cemetery in a bizarre ransom scheme.

Jason Warnick had been scheduled to stand trial next month in Selma on charges of theft and receiving stolen property.

But a judge recently rescheduled the case until May 9 at the request of the defense.

The Jefferson Davis Memorial Chair has been one of the points of interest for people who visit Confederate Memorial Circle in Old Live Oak Cemetery in Selma. It had been put in place in 1893 in honor of the former Confederate president for his visits to Selma and for the city’s contributions to the war.

The chair went missing in early 2021.

A group claiming responsibility had sent an email to news outlets saying the chair would only be returned if the United Daughters of the Confederacy, which owns the chair, displayed a banner with a quote from a Black Liberation Army activist at its headquarters in Virginia.

The chair was later recovered in New Orleans after police got a tip on its location and returned to Selma.

Warnick and two others were arrested.