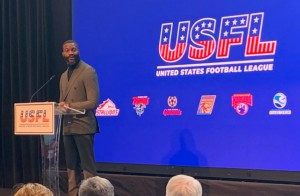 The new United States Football League has announced that Birmingham will be the host city for all of its games in 2022.

The USFL is made up of eight teams, including the Birmingham Stallions. The teams will play all games at either the new Protective Stadium downtown or at Legion Field.

The first game will feature the Stallions and the New Jersey Generals on Saturday, April 16. Those two team names were among those in the original USFL, which played from 1983-85.

The teams will play a 10-game schedule. The league will hold a player selection meeting Feb. 22-23, and training camps will open March 21.

Some of the coaches include Skip Holtz of the Birmingham Stallions. He is the son of legendary coach Lou Holtz. Former Texas A&M head coach Kevin Sumlin will coach the Houston Gamblers.

Games will primarily be played on the weekends. There will be playoffs and a championship game.