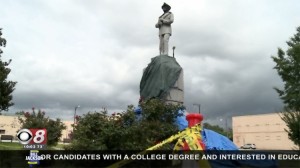 A judge is scheduled to consider arguments Thursday in a legal fight over a Confederate monument in Tuskegee.

Circuit Judge Steven Perryman has set a hearing in a lawsuit filed on behalf of Macon County and some residents.

They’re suing the local and state chapters of the United Daughters of the Confederacy. The group erected monuments across the South in the early 1900s.

As Alabama News Network has reported, the land in downtown Tuskegee where the monument stands was given to the United Daughters of the Confederacy by the Macon County Commission in 1906 to be used as a park for white people and to allow the monument to be erected.

But county leaders say in the deed, it says that when the park was no longer used for its intended purpose,  the land would return to the county’s control. That’s what they believe is the case.

Someone painted graffiti on the monument in 2020.

An attorney for the Tuskegee chapter of the United Daughters of the Confederacy, Jay Hinton, says the group owns the square legally and wants the monument to remain.

A decision in favor of the county could lead to removal of the monument, which has been the subject of on-and-off protests for decades.