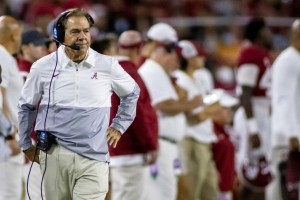 Alabama coach Nick Saban paces the sideline during the first half of the team’s NCAA college football game against Tennessee, Saturday, Oct. 23, 2021, in Tuscaloosa, Ala. (AP Photo/Vasha Hunt)

The school announced Wednesday that Coleman Hutzler will coordinate special teams and coach outside linebackers. Travaris Robinson will work with the cornerbacks and Eric Wolford will be the offensive line coach.

Wolford’s Kentucky offensive line last season was a finalist for the Joe Moore Award as the nation’s top line.