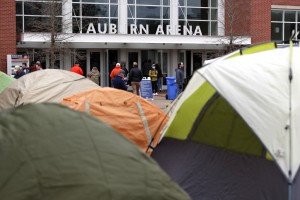 Auburn students and fans stand outside Auburn Arena as people camped out for the NCAA college basketball game against Kentucky, Saturday, Jan. 22, 2022, in Auburn, Ala. (AP Photo/Butch Dill)

Auburn University has announced that Auburn Arena will be renamed in honor of Bill and Connie Neville in recognition of the single largest gift in the university’s athletic history.

Auburn’s Board of Trustees approved the name change on Friday.

A dedication marking the name change will take place March 4 at the venue, with an on-court recognition March 5 during men’s basketball’s regular season finale vs. South Carolina.

The arena opened in 2010 with a seating capacity of 9,121. It is the competition venue for Auburn men’s and women’s basketball, gymnastics and volleyball.

“We wanted to do something special for men’s basketball because it’s become such another amazing Auburn experience,” Bill Neville said. “The fact that we can benefit so many student-athletes, students and members of the Auburn family was our primary inspiration. We’re honored that Auburn would consider us.”

“It’s a remarkable time for Auburn Basketball,” Connie Neville said. “Coach Pearl has built a wonderful program, bringing excitement and enjoyment to the arena. We are very humbled to be able to make this gift.”

Bill Neville serves on the Tigers Unlimited Foundation Board. The Neville’s previous philanthropic support resulted in the naming of the Bill and Connie Neville Lobby in the east elevator lobby at Jordan-Hare Stadium in honor of the Eufaula, Alabama, natives.

Bill’s father and grandparents graduated from Auburn University. Bill earned his undergraduate degree from Rice University in mathematics, computer science and mathematical sciences, and his MBA from Columbia University.

Their past philanthropic support of Auburn University includes membership in the 1856 Society and support of the Raymond J. Harbert College of Business, along with the Jule Collins Smith Museum of Fine Art.

“With their transformational gift, Bill and Connie Neville are investing in the future of Auburn Athletics and Auburn University,” Director of Athletics Allen Greene said. “Motivated by their love of Auburn, Bill and Connie’s philanthropy will directly benefit Auburn student-athletes for generations.

In addition to the naming of Neville Arena, the Board of Trustees also passed Phase I approval to initiate a project creating an additional basketball practice facility at the arena.

Trustees passed a resolution to construct the new practice gym and renovate existing team support spaces to alleviate overscheduling of the existing practice gym, which is shared by men’s and women’s basketball, and volleyball, as well as visiting teams. It will permit Auburn’s men’s and women’s programs to conduct practices at advantageous times and bring their facilities to Southeastern Conference competitive standards.

“Bill knew how much his father loved Auburn and he’s dedicated much of his life to honoring his father,” Auburn men’s basketball coach Bruce Pearl said. “That’s how I look at this gift. I will always work hard to try to continue to bring championships to Neville Arena.

Trustees also voted to grant Phase 3 final approval, the funding component, to the women’s basketball renovation project. The board voted on Sept. 10, 2021, to initiate the 4,000-square-foot project, then approved architect selection of the Goodwyn Mills Cawood firm on Nov. 12, 2021.

The renovated women’s basketball locker room and team spaces will facilitate improved student-athlete recovery and development, and more competitive recruiting. The project, estimated to cost $3 million, will be financed by Athletics Department funds.