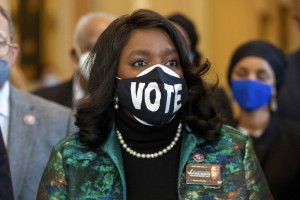 FILE – Rep. Terri Sewell, D-Ala., alongside other members of the Congressional Black Caucus, speaks in front of the senate chambers about their support of voting rights legislation at the Capitol in Washington, on Jan. 19, 2022. (AP Photo/Amanda Andrade-Rhoades, File)

The U.S. Supreme Court’s decision to halt efforts to create a second mostly Black congressional district in Alabama has sparked fresh warnings that the court is eroding the Voting Rights Act.

Some say Congress needs to intervene.

The court put on hold a lower court ruling that had ordered Alabama to redraw congressional districts to increase Black voting power.

Twenty-six percent of voters in Alabama are Black, yet there will still only be one majority-Black voting district in the state.

The Supreme Court says it will review the case in full.