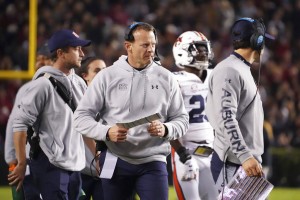 FILE – Auburn head coach Bryan Harsin walks near the sideline during a timeout in the first half of an NCAA college football game against South Carolina on Nov. 20, 2021, in Columbia, S.C. (AP Photo/Sean Rayford, File)

Davis left for personal reasons after replacing Mike Bobo, who Harsin fired after the regular season.

Kiesau was brought in as an offensive analyst in February 2021 but took over receivers when Harsin fired Cornelius Williams four games into the season.