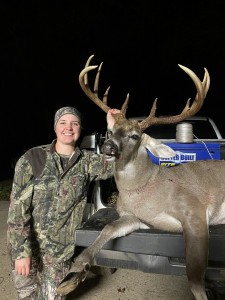 24-year-old Chelsea Hunter had gone hunting on family land in Macon County on January 4. She ended up harvesting a 242-pound, 13-point buck that’s “by far” the biggest deer she’s ever bagged and one she’d been tracking for about a year.

The photo of Hunter smiling afterward won the annual photo contest, which drew more than 100 entries and produced thousands of online votes.

As the winner of this year’s Big Buck Photo Contest, Hunter wins a $500 gift card donated by Jonathan Goode and Southeastern Land Group.

Hunter harvested a 9-point during the 2020-21 deer season and “about five minutes” after killing that buck, she saw this one.

“I was just amazed at how beautiful he was,” Chelsea said. “I hunted him hard last year. I was in the woods every opportunity I got.”

Hunter said she started hunting with her grandfather before her 10th birthday and began solo hunting “by the time I was 14 or 15.” She said she has one piece of advice for every hunter, regardless of experience.

“Learn to have some patience,” she said. “Let some small bucks walk, and they’ll end up a trophy.”

ABBAA created the Big Buck Photo Contest to further educate the public on the abundance of natural resources found in Alabama’s Black Belt region, an extension of the group’s encouragement of ethical hunting and fishing practices.