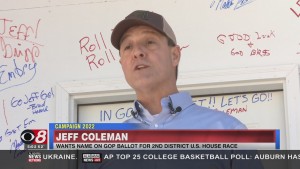 Dothan businessman Jeff Coleman is still trying to get on the Republican primary ballot to run for the Alabama’s 2nd District seat in the U.S. House of Representatives. But the Alabama Secretary of State’s office says it’s up to the state Republican Party to decide.

Coleman was in Montgomery on Monday to deliver letters to Alabama Sec. of State John Merrill and to Alabama Attorney General Steve Marshall. He wants their help to get his name on the primary ballot.

As Alabama News Network has reported, Coleman may be running campaign TV commercials and acting like a typical candidate for office, but his name isn’t on the ballot because of a conflict over the deadline for him to file his paperwork.

The deadline had been January 28, but was extended to February 11 when a panel of federal judges said Alabama had to redraw its congressional districts. But the U.S. Supreme Court overruled those judges.

Coleman says he filed his paperwork on February 10. The question is which of those two deadlines is the one that is in force.

In a letter on Tuesday, Merrill said, “As we have stated on numerous occasions, the deadline for qualification is a party issue… The question of whether or not the February 11 qualifying cutoff could still be followed is a party decision of which this office has no opinion.”

Coleman wants either Merrill or Marshall to ask the U.S. Supreme Court to clarify the deadline. He hasn’t said why he waited until after the original January 28 deadline before filing his paperwork.

Right now, the only person on the Republican ballot for the 2nd District Congressional seat is incumbent Congressman Barry Moore, who defeated Coleman in a Republican runoff two years ago.

The primaries are May 24.