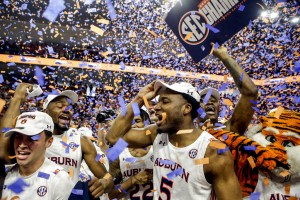 Jabari Smith scored 21 points, K.D. Johnson had 18 and No. 5 Auburn won the Southeastern Conference title with an 82-71 victory over South Carolina.

The Tigers secured the No. 1 seed for next week’s league tournament in Tampa, Florida, after entering the day one game up on No. 7 Kentucky, No. 13 Tennessee and No. 14 Arkansas.

No tiebreakers needed, though the Gameocks did rally after trailing by 19 early in the second half.

Auburn players celebrated on the court amid a flurry of orange and blue confetti. Jermaine Couisnard led South Carolina with 22 points.