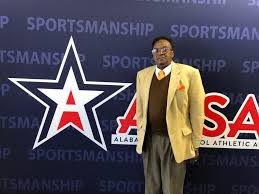 A memorial was held for him at Notasulga High School on Saturday, in the gym that bears his name.

“Coach Threadgill was one of this state’s the most dedicated coaches,” said AHSAA Executive Director Alvin Briggs. “Through his leadership in Macon County at Notasulga High School, he played an integral role in helping all our schools merge into one association. It was through strong men of wisdom like him that the merger was so successful from the very beginning.”

Threadgill, 70, was inducted into the Alabama High School Sports Hall of Fame in 2018. A native of Sumter County, he coached Notasulga High School to more than 900 boys’ and girls’ basketball wins. His boys won the state championship in 1987 and 1992. He also coached the Notasulga girls to the state title in 2001 and had two of his girls’ teams finish as state runner-up. Notasulga High School named its gymnasium in his honor.

He was born into a family of educators. Both of his parents were teachers, and his father, Obadiah Threadgill II, coached and officiated in the Sumter County area. In addition, his brother Kenneth Threadgill taught and coached basketball at Livingston High School, winning a state championship in 2003. Another brother, Reginald Threadgill, is a longtime basketball official in the Jefferson County area.

That legacy has now extended into a fourth generation. Obadiah’s wife Joyce is a career elementary school teacher. Their son, Obadiah Threadgill IV, is also a high school coach and teacher.