The law eliminates the background check and gun permit requirement — to carry a loaded handgun — concealed under clothes — in a bag — or in a car.

Dallas Co. Sheriff Mike Granthum says when the law goes into effect — it’s going to make people less safe. And make the job of keeping the peace — a lot harder.

“I do believe its gon’ cause lives. I believe some of the legislators are going to have blood on their hands,” he said. 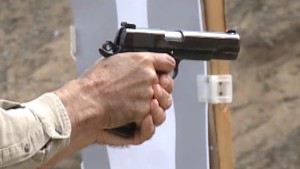 “Tempers are gon’ flare and a simple argument which may have been verbal — is now going to escalate into something that could turn into a shooting. Because those guns are going to be readily available.”

“Because most people do not read the law. All they want to hear is you don’t have to have a permit to carry a weapon. And they gon’ just take it and run with it.”

State lawmakers gave final approval of the controversial legislation last week. And Gov. Ivey quickly signed it into law — over the objections of law enforcement — who they each claim to support.

“With small sheriff’s offices like Perry County, we depend on these funds to help us purchase equipment, with training and all other things,” said Jones.

Gun lobbyists with the NRA and Bama Carry — pushed for the law’s passage.

“It’s election time. So, the legislators put their personal agenda, their personal campaigns, ahead of their community safety. It’s as simple as that,” said Granthum.

Alabama joins 21 other states — that have passed similar legislation.