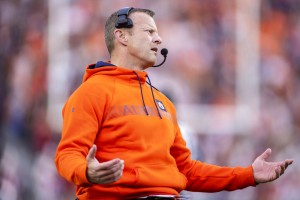 Auburn head coach Bryan Harsin reacts to a call during the first half of an NCAA college football game against Alabama, Saturday, Nov. 27, 2021, in Auburn, Ala. (AP Photo/Vasha Hunt)

He has turned his attention to finding a starting quarterback and stopping a five-game skid.

Harsin and the Tigers have opened spring practice. The second-year coach says he doesn’t see the value of looking in the rearview mirror.

The probe started with President Jay Gogue telling trustees that his office was “trying to separate fact from fiction” surrounding the polarizing coach. The program had lost 18 players and five assistant coaches after Harsin’s 6-7 debut season, including three coordinators.