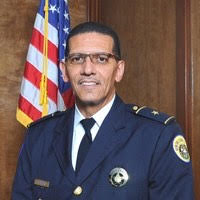 Darryl Albert – Photo from the City of New Orleans, Louisiana

The City of Montgomery has introduced a new police chief.

Albert brings more than 30 years of experience in law enforcement and most recently served as Commander of the Special Operations Division for the New Orleans Police Department.

According to a release from the City of Montgomery, Albert led units that slashed New Orleans’ murder rate while significantly reducing instances of violent crime. He led citywide preparation, deployment and recovery efforts during Hurricane Katrina as well as other storms and emergencies.

He is a member of the Fraternal Order of Police, National Organization of Black Law Enforcement Executives, Internal Association of Chiefs of Police, and the Police Executive Research Forum.

The City of Montgomery says its nationwide search resulted in a field of nearly 100 high-caliber candidates. Reed formed a committee of community leaders who evaluated each final candidate.