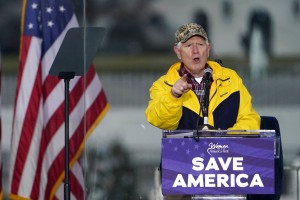 Former President Donald Trump has rescinded his endorsement of Rep. Mo Brooks in Alabama’s U.S. Senate race in a major blow to the congressman’s campaign.

Brooks is in a three-way fight with Katie Britt, former head of the Business Council of Alabama, and Mike Durant, a businessman best known as the helicopter pilot shot down and held prisoner in the 1993 “Black Hawk Down” incident.

By dropping the endorsement, Trump appears to be trying to prevent any embarrassment of backing a losing candidate in a high-profile race.

This is an open Senate seat, following the announcement by Sen. Richard Shelby that he would retire after finishing his sixth term. Britt was once his chief of staff.

Brooks issued a statement regarding Trump’s action, saying in part:

“I repeat what has prompted President Trump’s ire. The only legal way America can prevent 2020’s election debacle is for patriotic Americans to focus on and win the 2022 and 2024 elections so that we have the power to enact laws that give us honest and accurate elections.

I’ve told President Trump the truth knowing full well that it might cause President Trump to rescind his endorsement. But I took a sworn oath to defend and protect the U.S. Constitution. I honor my oath. That is the way I am. I break my sworn oath for no man.”