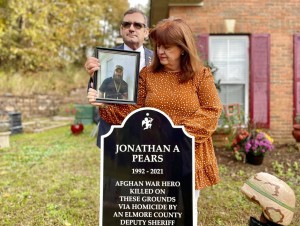 Andy and Mary Pears stand with a photo of their son by the memorial to him in the front yard of their home in Elmore County, Ala., on Nov. 5, 2021. (AP Photo/Kim Chandler)

The parents of a military veteran killed by a sheriff’s deputy say they want answers about what happened and changes to how police respond to a mental health crisis.

Thirty-two-year-old Jonathan Pears was shot and killed in the front yard of his parents’ Alabama home on July 28, 2021. His parents called 911 during a volatile argument with their son, who had PTSD.

They have filed a lawsuit accusing the sheriff’s office of using excessive force.

A deputy told the parents they had to shoot because he was coming at his father with a knife, but his parents maintain that he hadn’t threatened anyone and wasn’t close enough to be a danger.