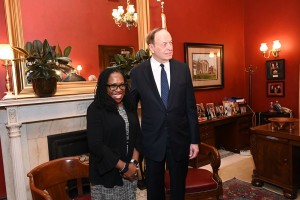 U.S. Sen. Richard Shelby (R-Alabama) says he has met with Judge Ketanji Brown Jackson, but will oppose her nomination to the U.S. Supreme Court.

“Yesterday, I had the opportunity to meet with Judge Jackson. As with any nominee to the Supreme Court, I believe it is important to carefully consider their qualifications and credentials, including their judicial philosophy, temperament, and prior decisions as a judge.

“We had a candid discussion in which I questioned her about my concerns, such as her judicial philosophy, position on court-packing, and prior sentencing record as a judge.

“While I enjoyed meeting Judge Jackson, her answers did not sufficiently alleviate my concerns. As such, I am unable to support her nomination to the Supreme Court.”