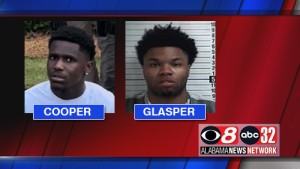 Panama City Beach police say two men from our area have been arrested on charges of inciting or encouraging a riot.

Police say 20-year-old Demarion Ty’Quan Cooper of Troy and 25-year-old Rashad Boyce Glasper of Wetumpka were arrested at their homes today on warrants connected to the unrest and criminal behavior the weekend of March 26.

Police say the charges stem from several incidents of disorder and violence that occurred in Panama City Beach between March 25‐27, which concluded in a shooting. They say Cooper and Glasper played a substantial role in promoting and influencing their followers to create this disorder with a propensity for violence.

Police say Cooper waived extradition and was taken to the Bay County Jail to await his first appearance in court. They say Glasper is currently being held at the Elmore County Jail pending extradition.

Police say several investigations into the criminal activity that occurred during the weekend of March 26 are ongoing.  They say additional charges and arrest for several individuals should be expected.