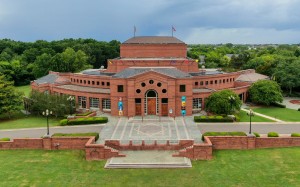 The Alabama Shakespeare Festival in Montgomery is presenting the world premiere of Ricardo Khan’s Freedom Rider. Performances run through April 24.

Freedom Rider follows the journey of four young people from across the country as they embark on a bus traveling through the South to challenge segregation in travel.

“I wanted to have different writers involved, to give each character with a different background an authentic voice,” said Khan in a statement.

The project has been in development since 2015 and will make its world premiere at ASF before transferring to Crossroads Theatre in New Jersey.

Khan said the intention behind creating original characters was to avoid giving a one-dimensional history lesson, and to instead embody the spirit and bravery of the Freedom Riders. The director said this show is about and for young people, who often need to be reminded that they can change the world.

“It was a time in America that we should be proud of – we crossed racial lines, gender lines, generational lines and geographic lines – and we made a difference,” said Khan.

Audiences will have the opportunity to step into history for themselves when they visit the theater. ASF is partnering with the Freedom Rides Museum in Montgomery, an organization under the Alabama Historical Commission, to bring exhibits and immersive experiences to the theater.

A refurbished 1960s Greyhound bus will be on the grounds of the theater for opening weekend, and exhibits from the museum will be displayed throughout the theater for the duration of the run.

Dorothy Walker, site director of the Freedom Rides Museum, said the organization is ecstatic the show will run on the 75th anniversary of the Journey of Reconciliation – what is considered the “First Freedom Ride” that took place in 1947, 14 years before the Freedom Rides Movement.

“We wanted to be involved with this production because it tells the history in a richer and deeper way,” said Walker. “The play brings history to life while reminding us that the Freedom Riders were actual people with their own stories. Hopefully, this will make people interested in learning about them.”

— Information from the Alabama Shakespeare Festival