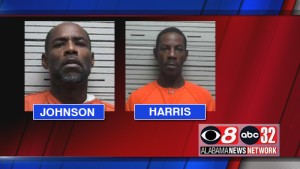 Prattville police say charges are pending against two men who are accused of thefts at Lowe’s and Home Depot.

Police say this morning at around 9:30, two plain-clothes detectives were inside Lowe’s on an unrelated matter when they noticed a man place a shopping cart, loaded with power tools valued at more than $2,000, near the exit of the door and walk away.

A short time later, police say they noticed the man running out of the door with the shopping cart, followed by Lowe’s employees.

Police say one detective chased the man to a truck while holding up his badge and announcing himself as “Police”. The other detective got into his unmarked car, turned on his blue emergency lights and pulled  behind the truck.

Police say the man has been identified as 43-year-old Kevin Andrew Johnson of Montgomery.

Upon further investigation, police say they learned Johnson and another man, 51-year-old Roderick Bernard Harris of Prattville, who was inside the truck, had committed another felony theft at Home Depot. Police say all stolen property was recovered.

There were no injuries to the officers or suspects.