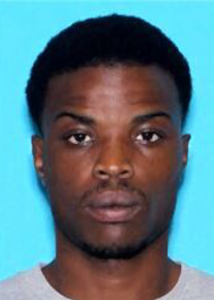 The search is on for a Montgomery man who is suspected of being involved in a robbery/shots fired case at the Walmart in Phenix City.

Police were called to the Walmart just before 9:30 p.m. Sunday. Investigators say no one was hurt in the robbery or by the gunshots. The suspects had already driven off in a silver 2015 Kia Optima when police arrived.

The Lee County Sheriff’s Office later spotted that car in the area of Bleeker Junction, where investigators say a chase ensued, ending with a wreck.

According to Auburn police, one of the suspects, Shemekia Brooks, was arrested on a charge of robbery in the first degree.

Police say the second suspect, Deuante Levon Richardson of Montgomery, ran away from the wreck scene and was last seen in the Chewacla State Park area in a blue jumpsuit. Police say he has two outstanding warrants for his arrest for robbery first degree and carrying a pistol without a license.

If you have information on Richardson’s whereabouts, call 911.