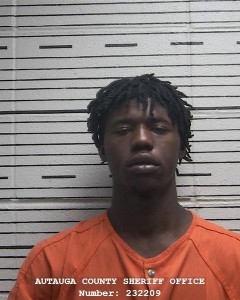 The Autauga County Sheriff’s Office says a man has been charged with attempted murder following a shooting that left a woman injured.

The sheriff’s office says 19-year-old Nyizell Markeius Tyus of Autaugaville has been charged with shooting a woman as she was walking away from him during an argument. The shooting happened in the 200 block of North Pickett Street in Autaugaville at around 10:30 Friday night, April 22.

The woman was airlifted to Baptist Medical Center South in Montgomery for treatment.

Investigators say Tyus had left the scene of the shooting before they arrived that night. They say he was arrested on Saturday, April 23, with the handgun believed to have been used in the shooting, as well as a substance believed to be marijuana.

Besides attempted murder, Tyus has been charged with marijuana possession and probation violation. Investigators say they recovered three illegally-possessed handguns.