A Selma non-profit donates thousands of dollars — to help fund agencies that serve hundreds of special needs children in Selma and Dallas County. 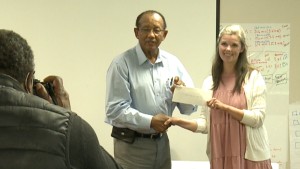 Former Selma Mayor George Evans organized the ESBF. And now serves as it’s Chairman of the Board.

“I was a part of special ed before I became superintendent, as well as before I became mayor. I was over the special program for years in the Dallas County school system,” said Evans.

“During that time, I had the opportunity to actually to visit with those children in their rooms, visit those teachers during that time and talk about the needs of those special needs children.”

The three agencies that received funds — together serve hundreds of special needs children. They each plan to use the funds for educational supplies and equipment.

It’s the 12th year the ESBF — has donated money to special needs organizations. The donated funds are raised through its annual golf tournament — held on the 3rd Wednesday in October.

“We do this for the benefit of the children. As well as the educators who have to administer to those children, in order to make sure those children who are special are not left out,” said Evans.

The agencies have to spend the money they get — by the end of the year.

Agencies receiving funds also have to provide the ESBF board with documentation — for how the funds were used.