Dave Fulford, Jr. started the Black Belt and Central Alabama Housing Authority with his wife — about 20 years ago.

Although his wife has since passed away — Fulford continues the work of repairing the homes of people who can’t afford to themselves.

“The low income, the elderly and veterans,” said Fulford. 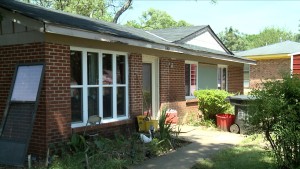 Army veteran Jessie Walters of Dallas County — had one of his legs amputated after his service — due to health issues caused by poor blood circulation. Making repairs to Walters’ home — is the BCAHA’s latest project.

“What we did was stop the water from coming in first. And we doing some windows and we’re doing some vinyl siding,” said Fulford.

“It’s a good thing. My roof done and uh, the windows and everything good,” said Walters.

Fulford says coming up with adequate funding has always been a challenge over the years.

And now inflation is eating up the few dollars — the program has been able to get. And now on top of that — a backed up supply chain is slowing down the construction process.

“It takes 3 to 5 months to get windows now. Pre-pandemic, I could buy a window for $100 dollars. Same windows that we buying now they’re six and seven hundred dollars.”

Fulford says he’d like to completely renovate Walters’ house — to make it more wheel-chair friendly. But the funding just isn’t there.

Even so — Walters says he appreciates — what’s already been done.

For more information about the Black Belt and Central Alabama Housing Authority — is available at bcah.com.