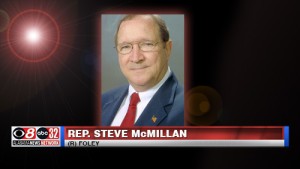 The longest-serving member of the Alabama House of Representatives has died.

State Rep. Steve McMillan (R-Foley) was 80 and had been diagnosed with brain tumors.

First elected in 1980, McMillan was known as the “dean of the House.” He was first elected as a Democrat to succeed his twin brother, John McMillan. He switched to the Republican Party in 1993.

McMillan announced this January that he had been diagnosed with three brain tumors and would be undergoing treatment.

Speaker Mac McCutcheon said McMillan was a mentor to many House members and a close friend and trusted advisor.

Gov. Kay Ivey said, “I’m deeply saddened to learn of the passing of my dear friend, Rep. Steve McMillan. He was Alabama’s longest serving House member, representing the people of Baldwin Co. for 42 years. Our thoughts & prayers are with his wife, Gayle, & his family during this time.”

She has directed that flags be flown at half-staff on Friday, April 29, until sunset Saturday, April 30.