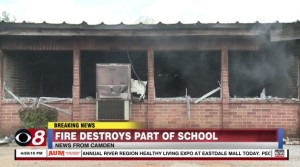 Part of J.E. Hobbs Elementary School in Camden has been destroyed by fire.

The school is made up of several buildings, and the fire destroyed one of them. The building destroyed had nine classrooms for Pre-K, Kindergarten and first grade students and some offices, including the principal’s office.

Now the affected students will have to be moved elsewhere to finish out the school year.

“We’re going to look at moving them to another campus where we’ll be able to work with them temporarily until we can get this building replaced, as well as utilize the other buildings that were not damaged by fire,” said Wilcox County School Superintendent Dr. Andre Saulsberry.

He says he got the call about the fire at around 5 a.m. Friday. No one was at the school when the fire started.

Hobbs Elementary is the largest elementary school in the Wilcox County school district.

State School Superintendent Dr. Eric Mackey told Alabama News Network on the scene that students’ permanent records have been saved, but electronics have been lost.

It is likely that the building will be declared a total loss.

State investigators have not pinpointed the cause of the fire. However, they say it was not arson.

Stay with Alabama News Network for the latest on the investigation.