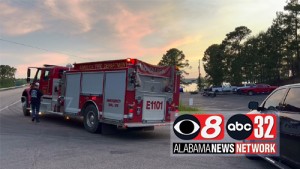 Alabama News Network has been on the scene of a fatal boating accident on Lake Martin.

Investigators say the man was operating a 30-foot Sea Ray Sundancer heading eastbound on Kowaliga Bay in the main body on Lake Martin, in between Castaway Island and Wares Slough when he went overboard.

Someone aboard another vessel pulled him from the water and took him to the Kowaliga public ramp adjacent to Alabama Highway 63, where he was pronounced dead.

No other details have been released.