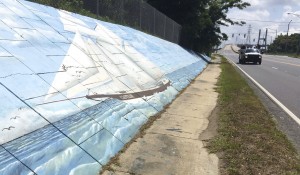 FILE – Traffic passes a mural of the slave ship Clotilda along Africatown Boulevard, in Mobile, Ala. (AP Photo/Kevin McGill, File)

Researchers are returning to the Alabama coast to assess the sunken remains of the last slave ship to bring captive Africans to the United States.

The Alabama Historical Commission says a team will begin a 10-day evaluation of the remnants of the Clotilda on Monday.

A company plans to moor a 100-foot-long barge at the site with equipment to support divers and store artifacts that are removed from the water for analysis.

The Clotilda was scuttled in a river after illegally dropping off 110 West Africans on the Alabama coast in 1860.

Descendants of the captives still live nearby in a community called Africatown USA.