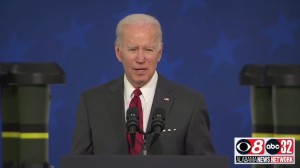 President Biden came to Alabama to give his heartfelt thanks to around 600 Lockheed Martin workers in Pike County who are producing missiles being used by Ukraine.

Biden spoke to the employees for about 16 minutes as part of his tour of the plant. His speech aired live on Alabama News Network.

Workers at the plant produce Javelin anti-tank missiles, which Ukraine’s military is using to defend the country against the Russian invasion, which has lasted more than two months.

“It’s amazing what you do,” Biden told the workers.

“We don’t always see all of the work that makes it all possible.”

The president said we are at an inflection point in our history, with autocracy battling democracy. He says China’s leadership believes that democracy can’t be sustained in the 21st Century because it takes too long to build a consensus regarding tackling issues, while a one-person autocracy can move much quicker.

While noting the more than 50,000 Javelins that have been produced in Pike County over 20 years, Biden said that for the U.S. to continue its historic role as the arsenal of democracy, the country needs to be able to produce more semiconductors. He said 35 years ago, 2% of the GDP was designated for research and development, while today, it’s half of that.

The president flew aboard Air Force One to Maxwell Air Force Base, arriving shortly after noon. Montgomery Mayor Steven Reed was among those greeting him.

From there, the president traveled via the Marine One Helicopter to Pike County.

U.S. Rep. Terri Sewell (D-Alabama) is with the president for his visit. She and Lockheed Martin Chairman, President and CEO Jim Taiclet helped introduce him at Lockheed Martin.