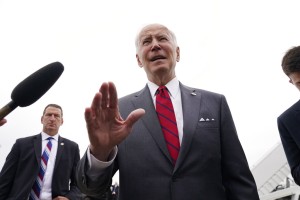 President Joe Biden speaks to the media before boarding Air Force One for a trip to Alabama to visit a Lockheed Martin plant, Tuesday, May 3, 2022, at Andrews Air Force Base, Md. (AP Photo/Evan Vucci)

On Tuesday, Biden warned that a “whole range of rights” are in jeopardy if it holds.

Earlier, Chief Justice John Roberts confirmed the authenticity of the leaked draft and said he had ordered an investigation into what he called an “egregious breach of trust.”

Biden said he would work to legislate the right to abortion into federal law.

The President made the comments shortly before boarding Air Force One to fly to Maxwell Air Force Base for his visit to the Lockheed Martin plant in Pike County.