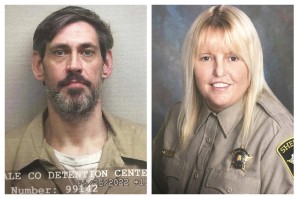 Alabama fugitive Casey White and jailer Vicky White were captured in Evansville, Indiana, after a 10-day manhunt, but she has died of a self-inflicted gunshot wound.

According to Lauderdale County Sheriff Rick Singleton,  Casey White, 38, and Lauderdale County Assistant Director of Corrections Vicky White, 56, were spotted at a hotel and led police on a car chase, which ended with a wreck.

Vicky White suffered a self-inflicted gunshot wound to the head and was taken to a hospital where she has since died.

Casey White and Vicky White, who are not related, fled the Lauderdale County Jail on April 29. Authorities said they believe Vicky White willingly participated in the escape, which took place on her last day before retirement.

The duo had fled Alabama in an SUV, which was ditched in Williamson County, Tennessee.

On Monday, U.S. Marshals said investigators were in Evansville, Indiana, following up on a tip after a pickup truck believed to have been used by the pair was found abandoned at a car wash on May 3. Police were alerted to the vehicle on Sunday.

At the time of his escape, Casey White was facing two counts of capital murder for allegedly stabbing a woman to death in 2015, according to the U.S. Marshals Service.

Vicky White was to face charges of forgery and identity theft for allegedly using an alias to buy the SUV used to facilitate the escape, according to the Lauderdale County Sheriff’s Office. A warrant had also been issued for Vicky White charging her with permitting or facilitating escape.