The city of Selma has a new — permanent — fire chief tonight.

The city council appointed Walter Dailey to head up the fire department at its regular meeting Tuesday.

It’s been like a revolving door at the fire chief’s office this week — at the Selma Fire Department. 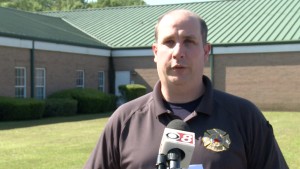 “I think I have a great group of guys. I think everybody is going to work well together.”

Dailey is a 15 year veteran of the Selma Fire Department — and has served as a captain for the last three.
He says currently the department is still severely understaffed — although Mason was able to recruit 12 new fire fighters — during his short tenure as fire chief.

“They’re at the station waiting to go to recruit school. We actually have four in recruit school right now. And we have four that are going through a system called reciprocity. Where they were certified through another department previously, and they have to go through a little bit more education to meet our qualifications. And then once they do that, they’ll be fully certified and on board with us fully.”

That brings the total number of fire fighters in the department — up from 19 to 31.

The department needs a total of 54 fire fighters — to be fully staffed.