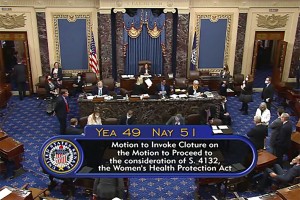 In this image from Senate TV, the tally of a Senate procedural vote that did not pass on the Senate floor is shown, Wednesday, May 11, 2022 at the Capitol in Washington. (Senate TV via AP)

The U.S. Senate has fallen short in a vote toward putting Roe v. Wade abortion access into federal law.

Wednesday’s 51-49 negative vote almost along party lines provided a stark display of the nation’s partisan divide over the landmark court decision and the limits of legislative action.

The afternoon roll call promised to be the first of several efforts in Congress to preserve the nearly 50-year-old court ruling.

President Joe Biden called on Congress to pass legislation that would guarantee the constitutional right to abortion services after the disclosure of a draft Supreme Court opinion that would overturn Roe v. Wade.

But Democrats in the split Senate lacked the votes to overcome a Republican-led filibuster.