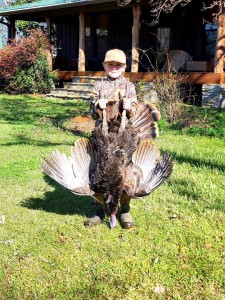 It all started when his dad, Scott Rouse, wanted to take Owen hunting. Along with two friends, they went to Perry County for the early-season hunt.

Several hours of calling and hunting proved fruitless and the hunting party was heading back to the truck, Scott said.

On the way, they spotted two gobblers, including one moving toward them, and worked to get Owen into a position for a clean, ethical shot.

“If Owen wasn’t meant to kill a turkey that day, nobody was,” said Lance Braswell of Camden, who was a member of the hunting party helping Owen. “The turkey just stands there. It was absurd. I’ve hunted all my life, and I’ve never seen anything like that. If you blink wrong, the turkey is gone. This one just stood there.”

“I was excited,” said Owen, who attends Meadowview Christian School. “I couldn’t believe it stood there.”

Owen was able to get the shot.

As the 2022 contest winner, Owen will get a limited edition, Birdseye maple pot call with matching striker paired by renowned champion turkey caller Preston Pittman. Both are numbered and signed by NWTF Hall of Fame inductees Ron Jolly and Preston Pittman. In addition, the prize package includes a signed copy of “Memories of Spring” by Ron Jolly and award-winning wildlife photographer Tes Randle Jolly and a $300 gift certificate sponsored by Jonathan Goode of Southeastern Land Group.

The ABBAA’s annual Big Gobbler Photo Contest ran throughout turkey season as a way to educate the public about the abundant natural resources found in Alabama’s Black Belt region.

“We are so appreciative of the many hunters who participated in this year’s contest,” said Pam Swanner, Executive Director of the Alabama Black Belt Adventures Association. “It’s rewarding when you see so many youngsters being mentored by their parents, teaching them the importance of wildlife conservation as a hunter while also carrying on the hunting traditions that make up the fabric of life in Alabama’s Black Belt. We invite everyone to visit the Black Belt to experience the region’s natural beauty, unique culture and southern hospitality.”