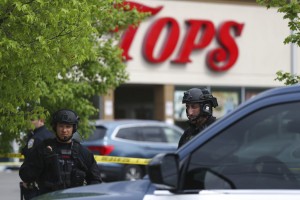 Police secure a perimeter after a shooting at a supermarket, Saturday, May 14, 2022, in Buffalo, N.Y. (AP Photo/Joshua Bessex)

Authorities say a white, teenage gunman in military gear who was livestreaming with a helmet camera opened fire with a rifle at a supermarket in Buffalo, New York, killing 10 people and wounding three others.

Officails said they are investigating the shooting Saturday afternoon as a hate crime.

Authorities said 11 of the victims are Black and two are white.

Police say a security guard fired shots trying to stop the gunman but was shot dead by the suspect.

Authorities say officers confronted the man in the store and he surrendered.

The suspect, identified as Payton Gendron of Conklin, New York, has been arraigned on first-degree murder charges.

The shooting occurred in a predominantly Black neighborhood in Buffalo.