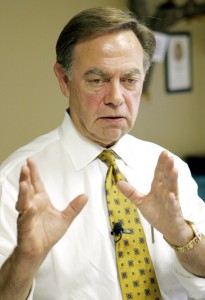 George Wallace, Jr. has taken time to share his thoughts as he remembers the assassination attempt on his father, Alabama Gov. George Wallace, as he campaigned for president on May 15, 1972, 50 years ago.

Fifty years ago, on May 15, 1972, I was a student at the University of Alabama and in my Tuscaloosa apartment when a “Special Report” on the television announced that my father, Gov. George C. Wallace, had been shot and critically injured in an assassination attempt on his life.

The frontrunner for the Democratic presidential nomination at the time, Dad had been campaigning in Maryland on the eve of that state’s primary.  The Michigan primary was scheduled for the next day, as well, and polling predicted that my father would carry both states by wide margins.

It was at a parking lot rally in Laurel, Maryland where Arthur Bremer, a troubled, 21-year-old busboy from Milwaukee, took five fateful shots and wounded my father in the chest and abdomen as he was shaking hands in the crowd. 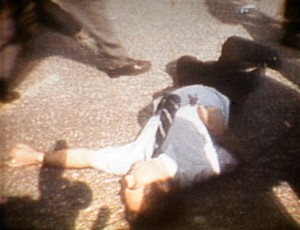 This is a CBS photo from video taken immediately after the shooting of Gov. George C. Wallace as he campaigned in Laurel, Md. for the Democratic nomination for president of the United States. (AP Photo/CBS)

Dad later told me that he was immediately aware his injuries were serious, and when he hit the ground, he purposely turned his head, closed his eyes, and pretended to be dead in hopes that a possible second gunman would choose not to shoot.

Despite the chaos surrounding him, he had felt a certain peace and finality come over him as he wrongly assumed his wounds would be fatal.  A Secret Service agent had kneeled over him in a protective position, but his drawn gun was dangerously close to Dad’s head.  “I wish you wouldn’t point that at me – I have been shot enough for one day,” he told the agent.

Bremer’s flurry of gunfire had also resulted in Secret Service agent Nick Zarvos being shot in the neck, Alabama State Trooper E.C. Dothard, a member of the gubernatorial security detail, receiving a graze to the stomach, and Dora Thompson, a campaign volunteer from Hyattsville, Maryland, suffering a knee wound after a bullet ricocheted off of the asphalt. 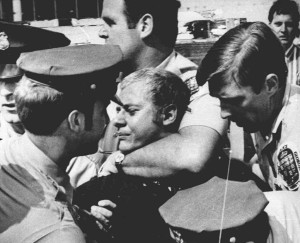 FILE – Arthur H. Bremer is taken into custody by police and agents moments after Gov. George Wallace was shot, in this May 15, 1972 file photo. (AP Photo/File)

A diary that Bremer kept for months stated his intention to “do something bold and dramatic” and indicated he had originally intended to assassinate President Richard Nixon.  Stalking the president on his various travels, Bremer got close enough to take a shot at an economic summit in Ottawa, Canada, but the strong Secret Service presence surrounding the chief executive prompted him to change plans and target my father – the most likely future president – instead.

Within minutes of receiving the news, state troopers arrived at my apartment door, whisked me to the airpot, and placed me aboard a private jet along with Charlie Snider, the national chairman of the Wallace presidential campaign, press secretary Billy Joe Camp, and a handful of others.  We soon arrived at Holy Cross Hospital, where my father had been taken by ambulance and was undergoing five hours of emergency surgery.

The attending doctors told us that his already grave injuries were complicated by the fact that just prior to the rally, Dad and his traveling campaign staff had stopped at a Howard Johnson’s restaurant, where he ate his usual lunch of hamburger steak and fries doused in ketchup.  The bullets had caused the undigested food to explode within his abdomen, and the lingering peritonitis blood infection and abscesses that followed would almost claim his life.

When I walked into the recovery room, my father was still heavily sedated and many of the stitches on his chest and stomach were visible.  He reached out with a look I had never seen – one of a man who had been to death’s door and was back among the living, reunited with his family. 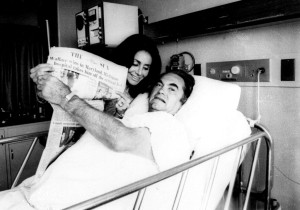 FILE – Alabama First Lady Cornelia Wallace joins Gov. George C. Wallace, who is displaying a newspaper headline that shows he had won the Maryland and Michigan Democratic presidential primaries, from his bed at Holy Cross Hospital in Silver Springs, Md., on May 17, 1972. (AP Photo/Files)

I have never forgotten that look.

It soon became clear that the injuries had paralyzed my father from the waist down, and though we held hope that he would eventually regain use of his legs, those particular prayers were left unanswered.  He remained hospitalized at Holy Cross for several weeks as he fought infections and held the continuing specter of death at bay.

Once he regained strength, he received visits from notable leaders that included President Nixon, Senator George McGovern, Congresswoman Shirley Chisholm, and Ethel Kennedy, whose husband, Robert, had been killed while campaigning for the presidency in 1968.  Cards, letters, telegrams, and flowers flowed into the hospital by the thousands.

Upon his release, Dad flew to Miami on a military medical aircraft, which was provided by President Nixon, to appear at the 1972 Democratic National Convention, where McGovern, a committed liberal, would claim the nomination.  My father’s forced absence from the campaign trail had allowed his competitor to secure the required delegates.

During his convention remarks, Dad warned the Democrats that embracing the extreme left and its ultra-liberal agenda would cost the party the support of the rank-and-file, blue-collar, middle-class families that served as its foundation and doom it to lose the Deep South states in future elections.

Like a clairvoyant with a crystal ball, all of the predictions he made those years ago have come true today.

As my father spoke, a handful of liberal delegates tried to shout him down, and some marched around the convention hall wearing paper masks depicting Arthur Bremer, which Wallace supporters ripped from their faces.  The vast majority, though, gave him a warm reception and appreciated the history of the moment.  His mission complete, it was time to return to his beloved Alabama.

My father would serve two more terms as governor and run for president a fourth time in 1976, though he lost the nomination to Jimmy Carter, a former Georgia governor who had once been a Wallace supporter.  Retirement from public office in 1987 would offer him the opportunity for reflection in his later years, and his relationship with God grew significantly.

One of the most enduring and revealing testaments to my father’s deepening faith came in an incredible letter of forgiveness he wrote with no fanfare or public announcement to his assailant, Arthur Bremer, in 1995.  A copy of the missive was discovered tucked away in Dad’s files years after it was written.

“I love you and have forgiven you, and if you will ask Jesus Christ into your heart, then you and I will be together in Heaven,” a portion of his letter to Bremer read.

During a quiet moment together, I once asked my father what led him to write the note, and his reply is one I will always remember, “Son, if I can’t forgive him, my Lord won’t forgive me of my sins.”

A more genuine sense of the fragile nature of humanity was revealed to my father as he lay on the asphalt of the Laurel Shopping Center parking lot, blood flowing from his body.  That was the first step on his road to Damascus, and, as his life’s journey continued, he would realize profound changes in his physical, mental, emotional, and spiritual life.  These provided him a clear picture of his past and what his future must be.

At that moment in time, there was a bond forged with many of those he had been accused of hating because of his past support for racial segregation, which he had since renounced.  The civil rights workers who had been injured and killed and had shed their blood now had a brother in George Wallace.

Their common sacrifice and their common bond was their own life blood.  Their shared suffering resulted in a covenant of forgiveness, understanding, and brotherhood being born.

He reached out to Black leaders across Alabama and the rest of the nation to apologize for his past sins and seek their forgiveness.  Tears were shed and deep emotions were expressed as he met with Jesse Jackson, John Lewis, Joseph Lowry, and others at his modest Montgomery home.

In a very real sense, the event that took place a half-century ago resulted in two distinctly different George Wallaces – the one who lived pre-shooting and the other post.

Perhaps the change was best illustrated one night when we watched television together as I sat beside his bed.  Knowing he had twice won a Golden Gloves championship as an amateur, been captain of the University of Alabama boxing team, and loved the sport his entire life, I turned on a prizefight between two ranked contenders.

“Son, I don’t like to watch two people hurt each other,” he said while asking me to change the channel.

In 1998, my father passed away from one of the many infections that had plagued him since being shot on that hot and humid day in Laurel.  At the time of his death, he was secure and confident in the saving grace of Jesus Christ.

Other victims of the shooting have left us, as well.

Agent Nick Zarvos, whose vocal cord was severely damaged by the bullet that struck him, spoke with a whisper until his passing in 2014 at age 79.

Trooper E.C. Dothard, who would be appointed director of the Alabama Department of Public Safety by my father seven months after the shooting, took his own life in 1989 at age 58.  He was battling the late stages of terminal cancer at the time.

I have been unable to ascertain the whereabouts of campaign volunteer Dora Thompson, who testified against Bremer at his trial and was awarded $920 by the Maryland Criminal Injuries Compensation Board in 1974 for the wound she sustained.

And, finally, Arthur Bremer was released from the Maryland Correctional Institution in Hagerstown, Maryland in 2007 after serving 35 years of his 53-year attempted murder sentence.  He is believed to currently reside in rural Maryland, and conditions of his release forbid him from coming in contact with elected officials or candidates.

Though prison officials confirmed it was delivered, Bremer never responded to the letter of forgiveness my father wrote him.

George Wallace Jr. is the son of Alabama Govs. George and Lurleen Wallace.  He previously served two terms as Alabama State Treasurer and two terms as a member of the Alabama Public Service Commission.