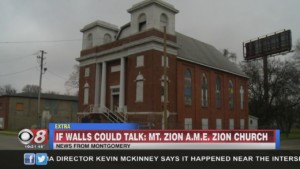 The historic Mt. Zion AME Zion Church in Montgomery has received another grant to restore the church building that played an important role in the nation’s Civil Rights history.

The church has received a third $500,000 grant from the National Park Service in an effort to transform the old church building at 657 S. Holt Street into a museum.

The church is where Dr. Martin Luther King, Jr. was chosen to lead the Montgomery Improvement Association, which organized the 1955 Montgomery Bus Boycott. It was a stopping point for people taking part in the Selma-to-Montgomery march in 1965. The church was also a backdrop in the 1990 film “The Long Walk Home.” That film featured Whoopi Goldberg.

WATCH:  “IF WALLS COULD TALK” FEATURE STORY ON THE CHURCH

But after the congregation moved to a newer location, the church building was sold and fell into disrepair. At one point, there were holes in the roof and it wasn’t certain the church could be saved. But years of major structural work have saved it.

The project director already has plans for the next phase of the restoration work.

“We’re planning to put the stained glass windows back in this building, we plan to restore the pulpit and alter the choir stand area inside the sanctuary area of the building,” C.P. Everett IV told Alabama News Network.