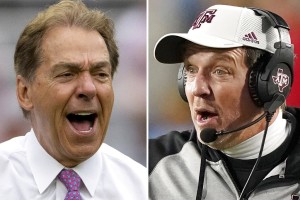 The Aggies signed the top recruiting class in the country earlier this year.

While speaking at an event in Birmingham, Saban also mentioned Jackson State and Miami as schools that have used NIL deals to lure players. Jackson State coach Deion Sanders responded by calling Saban’s comments about a $1 million NIL deal for a highly touted recruit a lie.

Texas A&M coach Jimbo Fisher is firing back at Saban. Fisher called Saban a “narcissist” and said his comments about the Aggies are “despicable.” Fisher says he did not take a call from Saban and declared: “We’re done.”

“That was a mistake and I apologize for that part of it,” Saban said, clarifying that he wasn’t accusing Texas A&M or Jackson State of breaking any rules or laws through NIL deals. “I really wasn’t saying that anyone did anything illegal in using name, image and likeness. I didn’t say that. That was something that was assumed by what I said, which is not really what I meant, nor was it what I said. There’s nothing illegal about doing this. It’s the system that allows you to do it, and that’s the issue that I have.

SEC commissioner Greg Sankey has publicly reprimanded both Saban and Fisher for their violation of SEC bylaws related to “Ethical Conduct for derogatory comments and public criticism” of another institution’s athletics program and staff.