Selma Mayor James Perkins, Jr delivered his State of the City address Friday morning. He touted his administration’s achievements — and took a few swipes — at the city council.

“The cemeteries look a whole lot better. And the Parks and Recreation, football, baseball, softball programs are up and running.”

Perkins laid out a list of his administration’s accomplishments and goals — during his annual State of City address.

He also said the city needs additional revenue to grow. 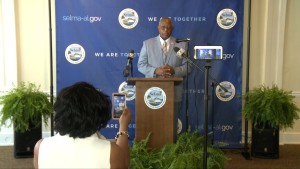 “This administration and this city council must tell the citizens that we must increase property taxes,” he said.

Perkins also took several jabs at the city council during the address. Suggesting that the council is the common denominator in the division that currently exists in city government.

He also said he will no longer attend city council meetings — and neither will department heads.

“This actually removes the administration from public debates with the city council.”

“Does Selma still need a nine member governing body? That’s my question. Is it time for the city of Selma to reduce the number of city council seats?” he asked.

“According to the handbook, while the council is the ultimate source of authority in the government in the city or town, the success of its efforts also depend upon the officials and the employees who will administer it’s policies and decisions.”