The Wilcox County Sheriff’s Office needs your help to identify a pair of burglars.

Sheriff Earnest Evans is hoping the public can help his investigators bring a couple of criminals to justice. 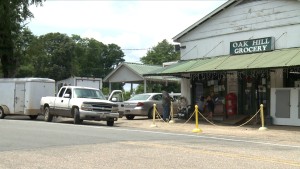 Oak Hill Grocery store — in rural Wilcox County — has been broken into by burglars two months in a row.

“The first time maybe somebody drove up — they didn’t get anything. But they had broke in the store,” said Evans.

“The second time they broke into it — they stole cigarettes and little small items out of the store.”

Evans says during each break-in — the burglars gained access to the store — by going under the building — and sawing through the floor.

“Same way both times. From the floor.”

“The damage that they are doing that’s, sometimes that’s worth more than what they are actually stealing,” said store owner Robert Davis.

The store’s surveillance system caught the latest break-in on video. And investigators are trying to use the video — to identify the two suspects.

“Anyone has any idea who these peoples are that broke into the store. We can try to apprehend them,” said Evans.

“If you have any information on it — give us a call.”