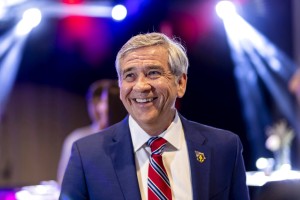 Mike Durant visits with supporters at his watch party for the Republican nomination for U.S. Senator of Alabama at the Stovehouse Event Center (The Belle Room), Tuesday, May 24, 2022, in Huntsville, Ala. (AP Photo/Vasha Hunt)

Mike Durant, the “Black Hawk Down” pilot who finished third in Alabama’s Republican Senate primary, said he will not make an endorsement in the upcoming runoff.

Durant said he will not endorse either of the remaining candidates for the GOP nomination for the Senate seat being vacated by retiring U.S. Sen. Richard Shelby. The June 21 runoff pits Katie Britt, Shelby’s former chief of staff and former leader of a state business group, against U.S. Rep. Mo Brooks, who resurrected his campaign after losing former President Donald Trump’s backing.

Durant said the choices are a candidate that has ”been in the public office for 40 years” and another he called “really not qualified” and accused of running an ethically challenged campaign that distorted his views.

“That’s what people have to decide. Unfortunately, it’s not a great option,” Durant said.

Durant is the owner of an aerospace company but best known as the helicopter pilot who was held captive in Somalia during the 1993 battle chronicled in “Black Hawk Down.” With his military background, Durant entered the race with a splash but ultimately ended in third place.

He said his first foray into politics was a disenchanting one and will also be his last. He blamed his campaign’s demise on a bombardment of negative ads he called “blatant” mistruths.

“If people say, well, ‘that’s just politics.’ Well, then don’t complain about what we have in Washington. That’s not politics. Wrong is wrong,” he said.

Super PACS spent more than $20 million to influence the Alabama primary, with ads being run against all three candidates.