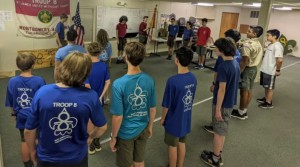 Some scouts in the Montgomery area who do so much to help others in the community, now need some help themselves.

The trailer is used for campouts for the troop, which is one of the largest in the area.

Not only is the trailer gone, it had been packed full of gear for a campout — with stoves, tents and others supplies inside. The scouts and their leaders say it’s going to be hard to make it through all of their summer events without all of it.

Trailer that was stolen from BSA Troop 8 – Contributed photo

“Like you hear it happen to other people, but you don’t think it would ever happen to you. So it was kind of shocking because we were about to leave for a campout and was like, ‘Well, we don’t have a trailer,” scout Savanna Fain said.

“Of all the things right now, right after we packed it. So someone definitely had planned it. I was very mad,” scout Cameron Fain said.

Troop 8 has now set up a GoFundMe account to try to raise money to buy a new trailer and all of the equipment that was lost. The scouts are asking for your

Trailer that was stolen from BSA Troop 8 – Contributed photo

“I don’t know if the person who did that fully understood the impact that it would have, but that’s kind of negative to focus on. We’re really just happy that the response from the community, people that we know, people we don’t know, has been overwhelmingly positive,” Scoutmaster Josh Brewer told Alabama News Network.