Sanders and Stewart Square Off in State Senate Runoff

A political newcomer takes on a political giant — in the race to represent the people of senate district 23.

Selma attorney and former state senator Hank Sanders — is running to win back the senate seat that he previously held for 35 years.

“So, I know all of the ends and outs. And I can serve this district from the moment I walk in over there,” said Sanders. 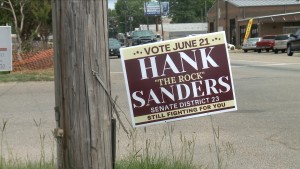 Sanders is the seasoned veteran in the race — with a vast amount of political experience under his belt.

While his opponent — 32 year old Tax Policy Lobbyist Robert Stewart of Selma — is the new kid on the block — making the race another classic choice — of experience or youth.

“It important to have someone that’s going to be a visionary that can have an imagination, the political imagination on what our communities can be to reach our full potential.”

Both candidates say getting voters back out to the polls — will be a key factor in the race. And clearly each one feels that he’s the best person suited for the job. 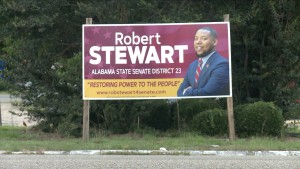 “I’m not critical of my opponent but he’s had nine jobs in nine years. And that concerns me greatly. You got to be able to stick it out. And fight it out, and get things done,” said Sanders.

“Our state is at a crossroads. And it’s important that we move forward,” said Stewart.

“A vote for Robert is a vote for gainst business as usual. And we cannot do the same thing we’ve done over and over again. If we want true transformation, it’s time to step up and put our money where our mouth is.”

And of course — we’ll have all the results and reactions from the runoff election — here — at Alabama News Network.