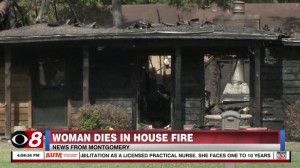 Montgomery firefighters say a woman has died in a house fire.

Investigators say a 31-year-old woman died in the fire at a home in the 200 block of Kiefer Drive. Her name hasn’t been released.

Firefighters say the fire began around 1:47 this morning. When they arrived, they found heavy smoke and visible flames.

No firefighters were hurt.

The cause of the fire isn’t yet known.