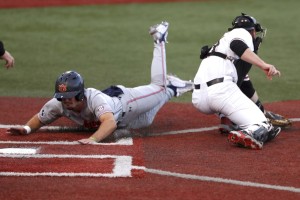 Sonny DiChiara hit a two-run home run, Brody Moore’s sacrifice fly in the top of the third gave Auburn the lead for good and the Tigers bullpen allowed just one run over 8 1/3 innings of relief in their 7-5 win over Oregon State on Saturday night in Game 1 of the best-of-three Corvallis Super Regional.

Cole Foster walked before DiChiara’s opposite-field homer gave the Auburn a 2-0 lead in the top of the first. Starter Trace Bright hit Justin Boyd with a pitch to lead off the bottom, Wade Meckler walked and Garret Forrester followed with a three-run homer before Kyle Dernedde drew a bases-loaded walk to score Gavin Logan and give Oregon State a 4-2 lead.

Nate LaRue hit an RBI single and Kason Howell scored on a groundout by Mike Bello in the top of the second and Foster scored on Moore’s fly ball to right in the third to make it 5-4.

Bobby Peirce hit a lead-off homer in the top of the fifth and Bello scored when Foster grounded into a double play to give Auburn a 7-4 lead in the eighth.

Cooper Hjerpe, a finalist for both the Golden Spikes Award and Dick Howser Trophy, was originally scheduled to start for No. 3 seed Oregon State (47-17) but was replaced by Jake Phennigs due to an undisclosed illness.

Tommy Sheehan (2-0) allowed two hits over 3 1/3 scoreless innings of reliefs for the win. Blake Burkhalter came on in the ninth and gave up an RBI double to Jacob Melton before earning his 14th save of the season.